The Technology of Blockchain is called The Game changer, Disruptive, or Agent of Transformations. Today Blockchain is studied by progressive governments, leading corporations, and global leaders. And the effect of the implementation of Blockchain is compared with the changes caused by the appearance of the Internet.

Every day, more than a million dollars are investing in Blockchain projects*, ICO collects tens of millions USD in a matter of hours, and the common capitalization of the cryptocurrency market is approaching to $250 billion. At the same time, an experienced Blockchain programmer gets $60-100 per hour instead average $15-20.

This course will allow you to understand how the crypto-currencies & digital tokens are organized, how the blockage works, why it is popular, where the business is in it, and what role is assigned to each of us.

In this course you will learn how projects with implementation of blocking and crypto-currency are being created, are working and being monetized today; As well as the implementation of the block chain in public administration (Govtech), banking systems (Fin Tech), Intellectual Property, Trading, Media, Retail, Medicine and other areas.

* In the first quarter of 2017, more than $120 million was invested in the Blockchain projects

What Will You Learn? 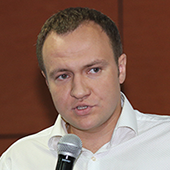 The founder of Confidento, Kibo App, and the Venture Academy. The ideologist and program director of the Open Innovations 2016 Forum, the producer, and organizer of the Startup Tour, the Innovative Convention, the Startup Picnic, the Foresight Navigation and others. The author of Initial Coin Offering Course
Buy $29.95
We suggest moving this party over to a full size window.
You'll enjoy it way more.
Close
Go Fullscreen